BBC News reported statistics on Tuesday from an emergency feeding center, where emaciated Nigerian children lay in rows on tiny hospital beds. The current food crisis in Nigeria, South Sudan, Yemen and Somalia is reportedly the worst in 60 years.

The humanitarian crisis is due in part of ongoing Boko Haram violence. Teenage suicide bombers killed six and wounded 16 yesterday in Borno state, according to the Associated Press. Using teenage girls as suicide bombers has become a favored Boko Haram strategy, claiming the lives of more than 200 young women.

Even though Deaf and hearing Christians in northern Nigeria are facing real threats, believers can still focus on God and praise Him.

DOOR’s Deaf translators recently brought Scripture in Nigerian Sign Language to Deaf communities for testing. Community testing provides the translation team with feedback about the clarity and “naturalness” of their translation.

The passages tested were from Acts 16:16-40, when Paul and Silas were praising God in prison. Seeing these Scriptures for the first time encouraged the Deaf to persevere. Deaf believers vowed to keep their eyes on Jesus and not lose hope, even though the “storm” of persecution rages around them daily.

“I thank God for this opportunity to interact with the Nigerian Sign Language Bible. For the first time, I am able to understand the Bible in-depth because it is in our own Nigerian Sign Language. Among the many Bible stories, one story stood out for me. It was the story of the stoning of Stephen.

“The Bible says that Stephen was a good man, filled with Holy Spirit and he was righteous. However, he was put to death for his boldness in declaring the Word of God to the Jews. Stephen did not fear death but he looked up and saw the glory of God and Jesus seated on God’s right hand. I was encouraged by this Bible portion.

“In northern Nigeria, there is a real threat to Christianity. I was challenged that — just like Stephen — I need to be strong and share the word of God, no matter the cost.

“Many deaf people in Nigeria have not seen any portion of the Chronological Bible Translation. I am encouraged more than ever to share these Bible portions with them. I know there will be enormous challenges, but the grace of God is sufficient.”

Will you praise God with us? 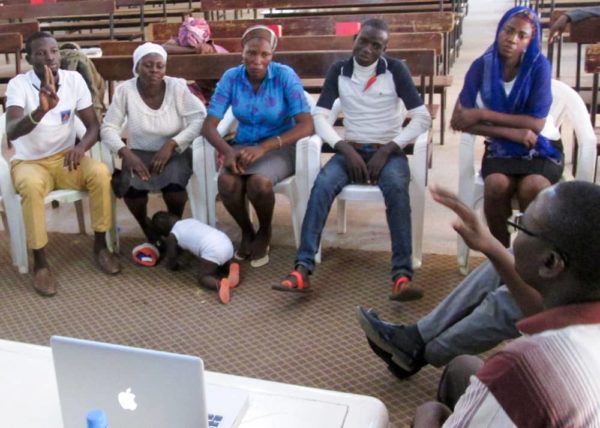 Deaf translators recently finished the second portion of DOOR’s 110-passage Chronological Study Bible, “Follow God How?” They brought the 77 passages to Deaf believers in Nigeria for a dedication celebration, and distributed copies of the translation on DVD.

DOOR’s translation team is beginning work on the final portion of the 110-passage Chronological Study Bible in Nigerian Sign Language.

Here’s how you can pray for them:

See more prayer needs from Deaf workers around the world.

From Confusion to Clarity

Deaf in Ethiopia are coming to Christ