Though a worthwhile endeavor, Scripture memorization isn’t always easy. The Internet is full of tips and techniques, designed to engrave God’s Word in your memory. Then, there are the “nutritional supplements” peddled by salesmen near and far that promise to “significantly enhance your ability to store and recollect information.”

Deaf students at a school in coastal Kenya take a much simpler approach.

“We watch and practice the stories with our teacher,” they told DOOR’s translation team.

“Practice” is a Deaf person’s way to process and internalize information received through story. During a recent visit, DOOR translators gave kids a chance to practice one of the new Bible stories that had been translated into Kenyan Sign Language

First, after a brief introduction, one of DOOR’s translators stepped forward to sign the story.

“The kids were keen and attentive. Everything was still apart from their eyes.

“One could clearly tell they were following along and were excited,” shares DOOR Africa’s Office Manager, Bonnie Ndungu.

Afterward, the leader of DOOR’s team stepped forward and asked the students if they understood the story. “Yes” signs flew up eagerly as the children responded.

“Now who can come forward and sign the same story?” the leader asked. 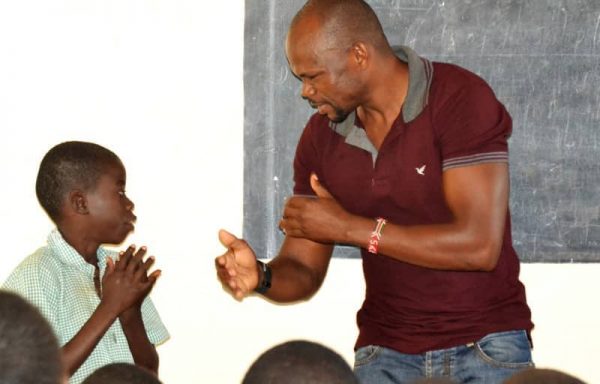 One child after another came forward to sign the story. Students missed a verse here or there, but not the gist of the story. The plot of the story, though short, was never lost. Then came another learning technique commonly used by the Deaf: dramatization.

DOOR’s team leader randomly began called pupils to the stage. “You,” he said, pointing to one of the Deaf boys, “will act as Jesus. And, you will be the people in the multitude,” the leader said as he pointed at a small group of students.

“The kids played their roles so well,” recalls Ndungu. “It was as fascinating as it was intriguing. Of course, there were rough edges in the acting, but it was so good, considering the students had been picked randomly.”

Ndungu wasn’t the only one impressed. Several DOOR translators from other countries, who happened to be traveling with the DOOR Africa team on this trip, said, “I have never seen kids talk about Jesus like this. In my country, we are not taught about Jesus. Kids don’t know Jesus.”

What Bible story was used to capture the attention and intrigue so many students? “Jesus heals a Deaf man.”

With your support, DOOR’s translation teams can bring God’s Word to more students like these through Chronological Bible Translation (CBT). Learn about CBT here.

“God has not forgotten the Deaf”