Kennedy Oyoo went to visit a hearing church in Homa Bay, Kenya, that had some Deaf members in the congregation. When the worship service began, Kennedy started looking around for an interpreter.

However, to his shock, two young boys stepped forward. One boy had a notebook and a pen, and was writing down the sermon as the hearing pastor started preaching. The other boy read over the first boy’s shoulder, trying to make sense of it before he signed what was written in the notebook to the group of Deaf people in the congregation.

Kennedy later learned that the boy writing was hearing, and the boy signing was hard of hearing. Because of the limitations of writing down the sermon concurrently as the pastor preached, sometimes the written text wasn’t written well or missed some vital pieces of information.

As the boy signed what he was reading, Kennedy noticed the frustration and dissatisfaction on many of the Deaf people’s faces as they struggled to make sense of what was being conveyed to them. Most of them eventually fell asleep during the service.

When the worship began, song books were passed out to hearing and Deaf alike. For most of the Deaf people, this was funny, and they made jokes about how the hearing culture did not understand the Deaf culture.

After the service, Kennedy immediately suggested to the Deaf people that they start their own service with Deaf-led songs that keep time through a gifted drum beater, and the sermons could start with watching the Kenyan Sign Language Chronological Bible Translation. 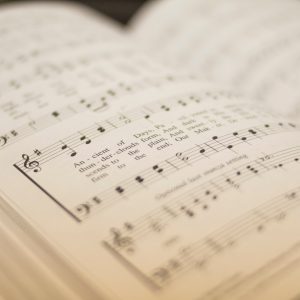 Today, the Deaf people in Homa Bay have their own church and it is growing. The worship time is full of clapping, dancing and jumping as they finally worship in their own language. Nobody sleeps in church anymore!

From Hopeless to Hopeful

Deaf can lead. Deaf can teach. Deaf can.